Burgstaller blasts Green & Whites to the top from the penalty spot!

Rapid capped off a fine working week with a battling win on the road in Klagenfurt. A spot-kick was enough to earn the spoils as the defence remained untroubled and the team took home all three points from Klagenfurt.

The second away match in quick succession took place on Sunday; following our 2-1 win in Gdansk and preceding another away tie at Neftci Baku, this time it was league fixture number two as we played Austria Klagenfurt in Carinthia. As announced prior to the game, our coach put his rotation policy into action somewhat, with Emanuel Aiwu, Moritz Oswald and Kevin Wimmer all left at home for the trip to Lake Wörthersee. In the case of Emanuel Aiwu, Ferdinand Feldhofer pointed out that the defender had to stay in bed with a fever just a few days ago.

Four players made their ADMIRAL Bundesliga starting debuts for Rapid this weekend; Patrick Greil (who had to miss out against Ried with adductor problems), Ante Bajić (a positive Corona test prevented him from playing against his former club last Sunday) and Nicolas Kühn (the opening scorer at Lechia Gdańsk was substituted in for Dragoljub Savić after about an hour a week ago), plus striker Rene Kriwak, who stated his case for inclusion clearly by scoring four goals in our summer friendlies.

The game almost started with a bang, as the ball was in the Klagenfurt net after just 30 seconds. Bernhard Zimmermann scored after Rene Kriwak had done the groundwork, but the celebration was short-lived as the latter was just offside in the build-up. Nevertheless, the early phase was very much easy on the eye, as the men around captain Maximilian Hofmann appeared dominant and found themselves time and again in dangerous positions in opposition territory. Although only four players from the starting lineup from the victory in Gdansk were in the starting XI, there was a seemingly telepathic understanding between the Green & White ranks. Bernhard Zimmermann and Nicolas Kühn took promising shots in the opening quarter of an hour, but neither made quite the right contact to find the net. 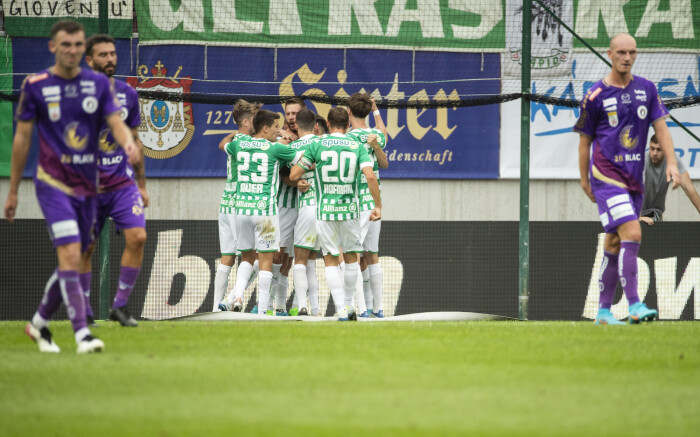 The celebration came shortly before the Rapid Quarter-hour, and was repeated at full time, just as it should be! © GEPA Pictures

Green & White dominance does pay off!

Rapid's Green & Whites remained dominant against the Violet Klagenfurt shirts, and the team created some good chances, but the impressive home keeper Philip Menzel could not be beaten in the first half. Halfway through the opening period, for example, the German keeper came out on top three times in about 90 seconds against Nicolas Kühn and Patrick Greil (twice). The hosts also got in front of Niklas Hedl's goal with a shooting chance on one occasion after just under an hour, but Michael Sollbauer was able to clear their attempt in time and put it behind for a corner. After a solo run, Bernard Zimmermann had another good opportunity versus the team he's scored many goals against, but in the closing stages of the first half there was not much happening in either penalty area, and so it was goalless at the break.

Head coach Ferdinand Feldhofer brought on Marco Grüll and Guido Burgstaller at the break, leaving Rene Kriwak and Bernhard Zimmermann in the dressing room. The two substitutes also created the first good chance in the second half, but a good attempt from Marco Grüll after a Guido Burgstaller pass was again turned away for a corner by the Klagenfurt keeper in the 47th minute. Bad news then struck ten minutes later, as the effective Patrick Greil had to leave the field, most likely suffering with a muscular problem in his thigh. Much better news came in the 66th minute though: after a beautiful combination via Marco Grüll and Guido Burgstaller, Christoph Knasmüllner, who had been substituted in for Greil, went to finish, only to have the ball cleared for a corner. However, as the VAR correctly determined a few seconds later, the clearance involved a defensive handball. Therefore, Rapid had a penalty, and Guido Burgstaller would soon hammer the ball unstoppably home in the capital of his home state to give the boys a 1-0 lead (67')!

The home side were anything but rocked though, and they quickly got back into the game. However, to spare any nerves, the scoreline did not change for the remainder of the game, and thus Rapid made it a perfect start to the Bundesliga season: 2 games - 2 wins - 2 goals, and with six points we sit alone at the top of the table!