Ten-man Rapid hold on to draw against Lustenau

Despite a dominant first hour, Rapid could only find the net once on Sunday through a first half Guido Burgstaller effort. After coming close to extending the lead several times, Ante Bajic’s second half red card gave the guests a lifeline and they levelled things up to take a point home from Hütteldorf.

At the end of another double-game week, we were faced with the challenge of a home game against Austria Lustenau. Efficiency had been the byword on the first two match days of the ADMIRAL Bundesliga, with two wins coming thanks to a solitary goal apiece, and the target was clear for today: to make it three wins from three and extend the perfect start to the league season in front of our home fans.

Having been crowned champions of the second division last season, Lustenau were making their first visit to Hütteldorf in 22 long years, and their record here in their last top flight spell was played six, lost six. However, that was all history ahead of Sunday’s game, with two totally different teams taking to the field. Ferdinand Feldhofer was forced to make a few changes to the starting lineup, not out of any arrogance, but with the simple fact in mind that a European second-leg looms large in the coming days. Firstly, defender Emanuel Aiwu was unavailable after completing his move to Serie A side US Cremonese this week. Danger man Nic Kühn was drafted into the XI up front alongside Guido Burgstaller, and Leo Querfeld, Patrick Greil and Thorsten Schick also started, as well as birthday boy Maximilian Hofmann, who wore the captain’s armband for the occasion.

The boys in Green & White looked comfortable in possession in the opening stages, and the first half-chance fell our way when Leo Querfeld could only head over from a corner kick (7’). A neat combination on the corner of the box allowed Jonas Auer to have a go (11’), but his shot was easily gathered by Lustenau keeper Domenik Schierl. Marco Grüll was the next to try a shot, but his effort from a tight angle was off target (20’). Seconds later, the winger found himself in the same situation, but this time he played a pass across the box for Guido Burgstaller, who swept the ball into the corner of the Lustenau net. 1-0 (21’)!

After VAR had confirmed that the goal was legal, Rapid continued where they left off. The ball remained mostly in and around the Lustenau penalty area, and a defensive intervention was needed to turn a Grüll cross over the bar (26’). Nic Kühn’s pressing game was so far upfield that he tackled the opposition keeper cleanly and passed back to Grüll, who was active once again, but his finish was turned away on the line (34’). Kühn himself had a shot blocked in a similar fashion soon after (36’) as Rapid continued to chase down a second goal. Auer delivered an inviting cross into the danger area five minutes before the break, and Patrick Greil slammed a shot onto the crossbar from the left of the area (45’), but there would be no more goals to celebrate before the interval, so the lead at half time was more slender than we’d have liked. 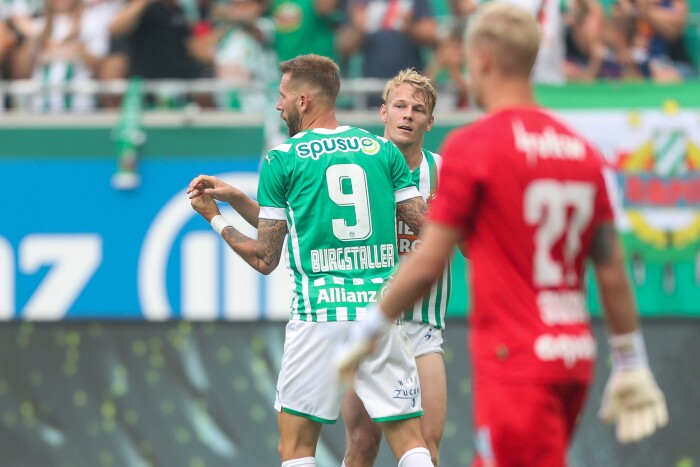 After scoring in midweek, Guido Burgstaller was at it again for Rapid on Sunday! © GEPA

Ante Bajic got the second half started with a shot on the turn which ultimately sailed over the bar from a central position (46’), before Lustenau offered their first real response with a free kick from Lukas Fridrikas which had Niki Hedl moving, but went over (50’). Suddenly the action became end to end, as Burgstaller passed across the six-yard box, only to see the guests counter effectively, forcing Auer into a risky challenge in the box, which he judged to perfection. Before any of the 17,500 fans could catch their breath, Burgstaller was back in action, and his close range header would have doubled the advantage had it not been for an excellent diving save (53’).

Instead of a second goal, the Green & Whites suffered a setback: Bajic picked up his second booking of the day, and we were down to ten men (58’). Greil and Burgstaller soon made way for Nikolas Sattlberger and Martin Koscelnik as the coach looked to switch things up and maintain the lead (63’). Grüll flashed a shot across the face of goal as the team sent a clear signal that their attacking ambitions were far from over, and we stayed on the lookout for a second goal when our number 27 hit the side netting after getting into the area (69’). Yet it was the visitors who would find the back of the net next, Stefano Surdanovic chipped the ball in and our defenders couldn’t stop it from crossing the line. 1-1 (70’) and a tense finale was on the cards.

Berni Zimmermann came on as the Rapid quarter-hour began, and Rene Kriwak was introduced with less than ten minutes to play, but neither could make an offensive impact as the man-advantage left Lustenau in a strong position. With no late chances of note falling for either side, the game was over after 94 minutes at 1-1. Tough to take after dominating proceedings for so long, but in the end, a point gained in difficult circumstances.

We’ll need everyone’s support in Hütteldorf again on Thursday, as we aim to overcome our 2-1 deficit in the UEFA Europa Conference League qualifier against FK Neftci Baku. Let’s do it, lads!