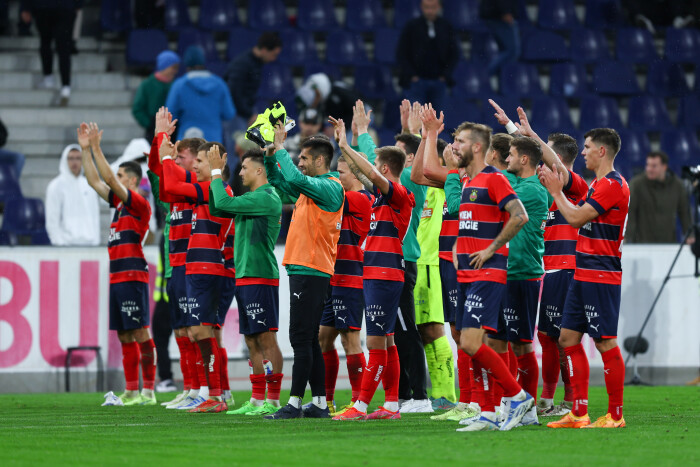 A big THANK YOU to all the Rapid fans who made the trip to Salzburg on Sunday. © GEPA

Rapid recovered from a very early setback to earn a precious point away in Salzburg. A brilliant response to falling behind early on saw Leo Querfeld’s first league goal secure a share of the spoils in Sunday’s game, as the team held firm against the hosts’ late pressure.

On Sunday, our team faced RB Salzburg away from home in the 9th round of the ADMIRAL Bundesliga. In the pouring rain of Salzburg, Ferdinand Feldhofer's XI wanted to bring focus back to the sporting side of things, and bring some calm after a number of eventful days.

Despite the best intentions, the beginning of the game certainly didn’t go according to plan; inside 20 seconds, Salzburg played a long, high ball downfield and won out in a footrace, slotting the ball away for an extremely early lead. 1-0 (1’). Our team managed to put the terrible start behind them though, and it was clear to see that they were pushing for a response. On a few occasions, passes searched for Jonas Auer deep into home territory, but the attempts were cut-out at the last moment (4’). A few minutes later came the first real scoring chance for the boys in their Blue & Red away jerseys; an accurate cross from Nic Kühn called the keeper into action at his near post (8’) before Martin Moormann registered a shot on target following a corner ball (9’). Roman Kerschbaum also had a look at goal, but his effort ended up off-target (10’). Impressively, the early goal had not deterred our team, and aside from that moment in the first few seconds, the game was under Rapid’s control.

It was more than deserved then, when we struck mid-way through the first half. Martin Koscelnik’s long throw found its way to Leo Querfeld, and the youngster kept a calm head in the box, smashing the ball in off the woodwork from an acute angle for his first Bundesliga goal! 1-1 (21’)! Unsurprisingly, the hosts then quickly looked for a response of their own, and they found the net on the half-hour mark, but thankfully it was scored from a clear offside position, and so the goal did not stand. The game then became an end-to-end battle for the remainder of the half; Rapid were always attempting to get forward and fighting for every ball, but no clear-cut chances fell our way. The hosts had one half chance, but that was wide of Niki Hedl’s goal, and our last hope of the half was from a Salzburg handball in the area, which unfortunately went unpunished despite a VAR check. That left things finely poised at the break, with the scoreline 1-1. 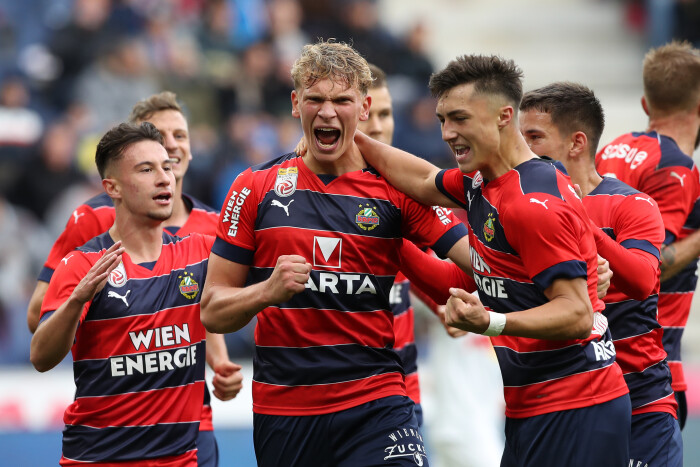 Pure emotion! Leo Querfeld bagged his first Bundesliga goal, and what a vital one it was. © GEPA

The opening minutes of the second half resembled those of the first; Salzburg had a chance to take the lead again, but Martin Koscelnik steered the ball onto the crossbar with his head (47’). Nic Kühn tried to get in on goal a moment later, but the home goalkeeper was just a touch faster to reach the ball (51’). Salzburg had the next big chance themselves, but Martin Koscelnik made an important intervention at the last moment (60’). Ferdinand Feldhofer then brought on some fresh legs as Marco Grüll replaced Berni Zimmermann (62’), but the next chance came through Nic Kühn once more. He was able to keep hold of the ball in the penalty area, but hammered his finish just wide of the goal (64’). That was to be his final contribution of the game, as Ferdy Druijf took to the field in his place after 73 minutes. With that change came our first real chance since the break, as Aleksa Pejic put his header nicely on target, only for the keeper to get across to it just in time (74’). The Rapid quarter-hour began in a combative manner, but overall the hosts had more control in the second 45. Niklas Hedl needed excellent reflexes to deny Salzburg’s best chance of the game (83’), before he watched one effort sail over the top (86’). Shortly afterwards, Michael Sollbauer had to clear the ball off the goal line (88’), in a dramatic final phase during which our team held out strongly to resist the home team’s pressure. Thorsten Schick replaced Guido Burgstaller late on (91’), but there were more exciting moments to endure, until Niki Hedl produced a good stop from a header with the game’s final chance (95’).

After a strong first half performance in attack, it was an intense battle after the break, but our team stuck together and showed real heart in holding out for the draw away in Salzburg. We therefore deservedly took a point home to Hütteldorf, something which will do us no harm at all in preparation for the challenges ahead.