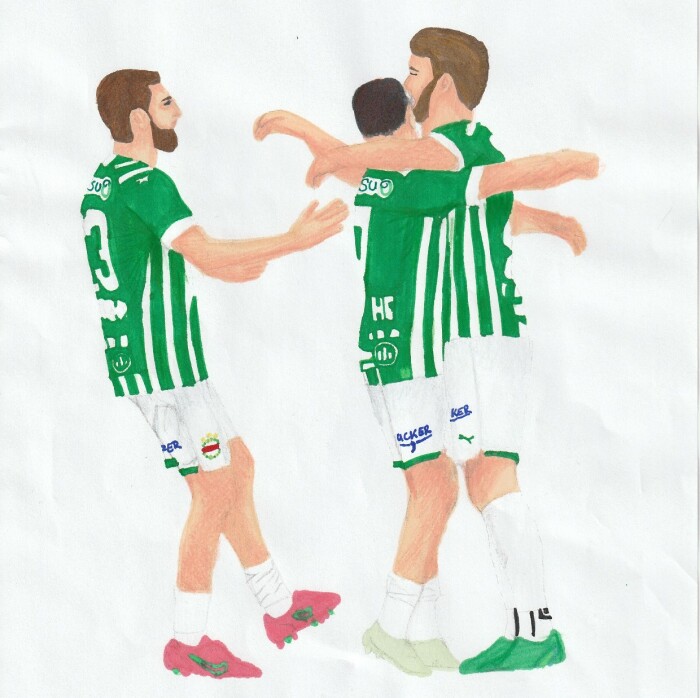 The Green & Whites got their reward for creating numerous chances with five goals at home on Wednesday!

Five-star Rapid outclassed visitors Hartberg to cap celebrations on Austrian National Day, and put a hard home run behind them. A hat-trick from Guido Burgstaller did the damage, and second half goals from Marco Grüll and the returning Nic Kühn made it a comfortable win, despite a late penalty miss.

After another setback was suffered with defeat at home at the weekend, Rapid came into their postponed match day five fixture against TSV Hartberg with both sides in desperate need of points. The East Stryrian visitors occupied the bottom spot in the ADMIRAL Bundesliga before this game in hand, but they could boast a solid record at the Allianz Stadium, losing only once to the Green & Whites in the last seven matches in Hütteldorf, winning on four of those occasions.

Interim boss Zoran Barisic named Christopher Dibon as the captain for the game on Austria’s National Day, with Guido Burgstaller and Ferdy Druijf tasked with getting the goals up-front. The game got underway at a furious pace with Rapid looking determined to make up for their recent home struggles, and it took just over five minutes for the first real opening of the match; Druijf got on the ball near the byline on the right hand side, and from a tight angle he got the ball through the legs of Hartberg keeper Rene Swete, only to see it roll agonisingly across the goal line and away (6’).

Rapid’s problems of late have centred around turning chances into goals, and the next phase of the game did little to allay fears of that issue continuing, as a series of opportunities came and went for the dominant hosts. First, Marco Grüll got free after a neat combination on the left, his shot was aimed at the far post, where it was just tipped away for a corner (11’). The resultant cross into the box fell at the feet of defender Leo Querfeld six yards out, but as he poked the ball towards goal, it was blocked by the keeper (12’). Just three minutes later a trademark low free kick from range was heading from the laces of Grüll’s boot right for the bottom corner, but again it was well saved by Swete in the Hartberg goal (15’). Rapid’s number 27 then sliced a shot over the top after Thorsten Schick picked him out in the area (17’) before the guests caused concern for the first time with a Ruben Providence shot from the left of the area which needed to be deflected over the bar (18’).

Despite all those attempts, Rapid had nothing to show for their efforts as the game moved into a quieter period, so when the opening goal did come, it was almost a little unexpected, if not undeserved. There were options left and right on the break and Rapid opted for the latter, where Schick played a low cross towards Burgstaller. He had plenty of work still to do, but with the ball half a step behind him, he swivelled in the box and flicked the ball in with his heel; a lovely finish! 1-0 (26’). Hartberg then mounted a response, and Niki Hedl had to make his first big stop, denying Dario Tadic after a long, bouncing ball forward (29’). Leo Querfeld then did very well to turn a dangerous cross over his own crossbar under pressure (31’), but the visitors were not done yet for the first half, as Tadic played through Okan Aydin who lifted the ball over Hedl and under the bar to equalise on the stroke of half time. 1-1 (45’). It needed a VAR check for offside, but once that was complete it was confirmed that the goal stood, and the two teams would be heading in level at the break. 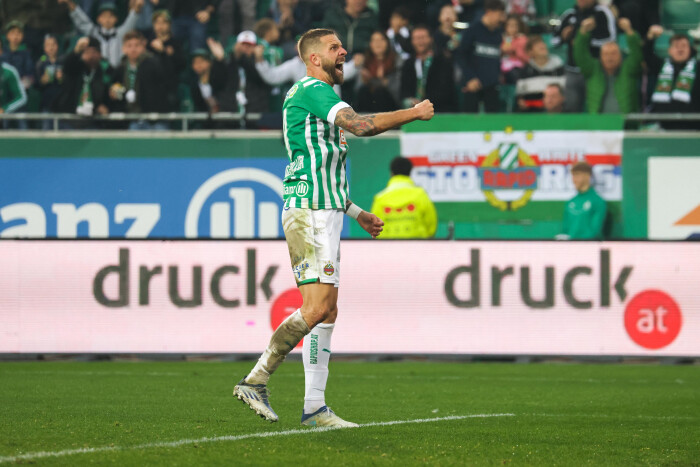 The Green & Whites restarted the second 45 with a familiar feeling of injustice, having failed to turn their dominance into an advantage on the scoreboard. Nonetheless it would not take long until Rapid were back in front: Grüll’s cross was headed onto the post by Schick, and the loose ball fell to our scorer Guido Burgstaller, who remained calm and composed to bury the rebound and restore the lead. 2-1 (53’)! Now on a hat-trick, the Rapid number nine had a cushioned header saved soon after (57’), before Hartberg attempted to level things again with a long shot from Aydin which sailed just past the right angle (60’).

The first of Rapid’s substitutions brought a big cheer from the 14,400 fans in attendance, as Nic Kühn made his return after recovering from injury alongside Patrick Greil (66’), and all of a sudden a flurry of goals fell for the home side. Swete spilled a shot from range, and Grüll was there to sweep up, forcing the ball just over the line before ex-Rapid man Mario Sonnleitner could clear it; 3-1 (68’), and soon after, Jonas Auer’s cross came to Burgstaller who volleyed the ball down and in at the back post to complete his hat-trick and make it 4-1 (72’).

The home side were looking ever so comfortable as the Rapid Quarter-Hour rolled around, and although a couple of half-chances were saved by the Hartberg keeper, the guests were having no attacking impact of their own. Roman Kerschbaum went close with a header which drew a reflex stop from the feet of Swete (78’), and Rapid remained camped in the Hartberg half in front of Block West. Greil was fouled in the area, giving the Green & Whites a chance to increase the lead, but unfortunately the only blot on our copybook was a double miss from Druijf, whose first penalty was saved, and his second attempt went wide after a retake was ordered (86’).

Druijf would eventually get his name on the board for the day with an assist though, and his curling pass swung into the path of Nic Kühn, who raced clear behind the defence and tucked the ball away to make it 5-1 in stoppage time (91’). That completed a routine, yet vital win for Rapid, putting an end to a tough spell, and moving us up to fifth in the table now that everyone has played 13 games. We can now look towards the final three games of the year with a more positive mindset, starting with an away trip to Lustenau on Saturday evening. RAPID!