Super-Sub Strikes Again to Seal an Away Win 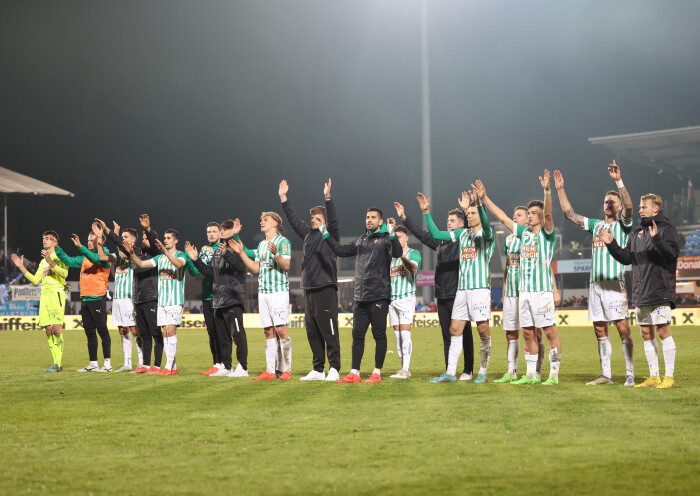 We got the win in Hartberg! Thanks for your superb support! © GEPA

Rapid ended 2022 on a high, following up last weekend’s home win with another three points on the road. After being held by Hartberg for long periods at 1-1 in an even contest, Berni Zimmermann grabbed a precious goal at the death to send Rapid into the winter break with that winning feeling!

Before the long winter break there was one last competitive game facing SK Rapid on Saturday; namely a clash with TSV Hartberg away in Styria for the 15th round of the ADMIRAL Bundesliga season. Hartberg have often been uncomfortable opponents for the Green & Whites, but the head to head record was slightly in Rapid’s favour (5 wins, 4 draws, 4 defeats) and after defeating a strong LASK side last time out and winning 5-1 against the East Styrians in a recent rearranged fixture, hopes were high for Zoran Barisic’s team. Having scored a hat-trick in the late October win against Hartberg, Guido Burgstaller started once again up front, with Marco Grüll, Ferdy Druijf and Thorsten Schick in support as Rapid looked to close out the year in style with three points, whilst the opponents were aiming to move off the foot of the table before the long pause.

The home side came out of the blocks with intensity, and launched the first shot on goal from distance almost immediately, although it was easy to hold for Niki Hedl (1’). After being on the back foot for the first ten minutes, Burgstaller got forward and fired into the side-netting (11’), and the momentum stayed with Rapid; Christoph Knasmüllner hit a long shot off target (12’), Martin Moormann’s header was too central (14’), but two minutes later, Jonas Auer delivered a beautiful cross towards the back post where Grüll was in position to turn it home with his head and delight the packed away section of the Profertil Arena. 1-0 to Rapid (16’).

Burgstaller had a chance to get goal number 11 for the season, but from a half-cleared attack his shot came back in from the edge of the area, and only just ended up going wide (30’). Hartberg slowly began to improve towards the end of the half, but although Ruben Providence had the ball in the back of the net, it was rightly chalked-off for a handball in the build-up (41’). Despite being pushed back more often, Knasmüllner had a chance to double the lead before the break, when he hit the side-netting following a pass from Grüll on the right (42’), and then at the other end there was a let-off, as Okan Aydin rounded the keeper and hit only the post for the home side (43’). Aydin kept his head up though, and seconds later he controlled well in the box, and tucked in the equaliser for Hartberg (44’) to send the teams into the changing rooms at 1-1. 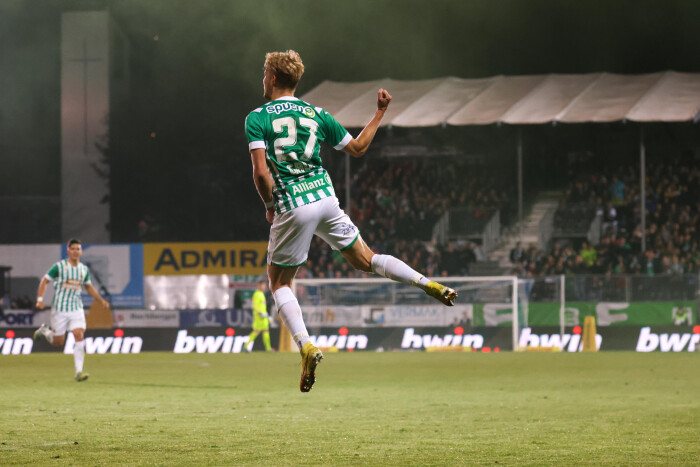 Marco Grüll rising high! First for his header, and then for his celebration! © GEPA

Roman Kerschbaum was sent on after the interval, but the game remained a tight affair with both teams good value for the 1-1 scoreline. Burgstaller set Schick away in front of the keeper, but he lifted his finish over the bar (54’), and ten minutes later Knasmüllner’s next shot was also a fair way from troubling the Hartberg goal. There was good news for Rapid though as Nic Kühn came onto the field, along with this season’s super-sub Berni Zimmermann (70’). Still the game remained fairly even, as both teams struggled to really carve out chances of note. Marco Grüll tried to change that with a powerful run down the flank, but didn’t have a good option left to get in front of goal (80’). Ante Bajic came on in place of our goal scorer, and it was fellow substitute Kühn who hammered a dipping shot just over the top from the left side (86’) as time ebbed away.

However, there was still enough life left in the game for Martin Koscelnik’s cross to pick out Kerschbaum in the box, his header aimed for the far post, and Zimmermann raced in to apply the finish to spark more jubilation in the Rapid sector! We led 2-1 (88’)! Kühn came so close to adding another in stoppage time, but his placed shot bounced back off the post, nevertheless after 94 minutes, the Green & Whites had secured an important win! We signed off from competitive action in 2022 with three more points, and there’s a feeling of forward momentum moving into the winter break. We’ve still got some exciting friendlies to look forward to (including a home game against Schalke 04) before the team can take a holiday and recharge for the new year, but we closed out our Bundesliga duties in the best possible way. THANKS FOR YOUR SUPPORT IN 2022!