Before our team headed off for the winter break, there was one last match of 2022 to be played; our friendly match with the German giants Schalke 04, in Hütteldorf. Despite the wintry conditions, more than 9,000 fans came along to enjoy the spectacle!

Right from the off, the spectators were treated to an exciting game, which was played as if it were a competitive match. There was no “exhibition match” atmosphere here. After an end-to-end start, the guests went in front through a Soichiro Kozuki strike (8’). Rapid remained on the hunt for a leveller, and went close on a few occasions - most notably from a direct Nic Kühn free kick - but mostly, that final ball was just not able to be met by a Green & White shirt. After 18 minutes, Guido Burgstaller went for placement with a delicate strike, Martin Moormann also caught the eye with his effort on target, but both were parried by the Schalke shot-stopper. Burgstaller tried again with a lovely flick of the heel, but the ball would end up just wide of the target!

The Royal Blues however, were rather more efficient, and with their next clear chance they doubled the lead through Simon Terodde (31’). Before the break there were chances to reduce the deficit; Burgstaller did well to get into the box, but his powerful hit was once again parried, and Leo Querfeld’s header was just off target, so we’d go in at the break trailing by two. 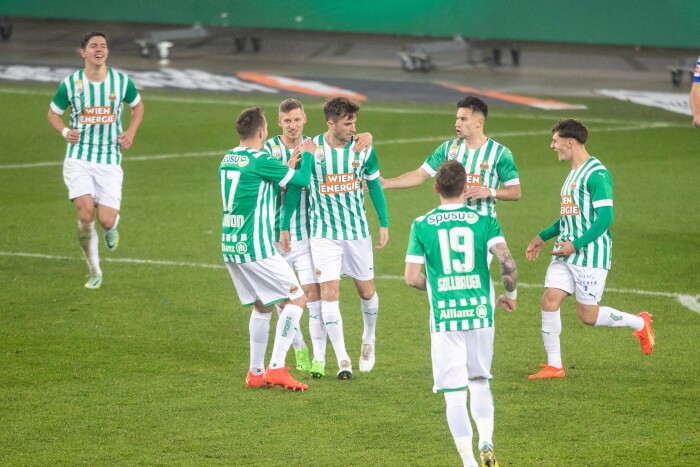 Christoph Knasmüllner fired us back into the game with a fine free kick! © GEPA

As you might expect for a friendly, we wanted to give as many players as possible a run-out, so the team in the second half looked very different. The action after the break couldn’t have started much better for Rapid, as Christoph Knasmüllner lined up a free kick from 25 yards out, and curled it beautifully into the top corner for 2-1 (49’)! We almost had a quick equaliser as well, but Ante Bajic’s lob was eventually scrambled away off the goal line! However, just after the hour mark, the second goal would come. After a hand ball in the box, Roman Kerschbaum calmly converted from the penalty spot to make it 2-2 (62’)!

After that, more changes were made, as Oliver Strunz, Marko Dijakovic and Pascall Fallmann came on. Berni Zimmermann almost made it a stunning turnaround for Rapid, but his solo run ended only with the ball hitting the woodwork. Just before the Rapid Quarter-Hour we went close again; Roman Kerschbaum sent Bajic clear behind the back line, but the Schalke keeper came up with a crucial stop. We did hold on for one moment though, as the Royal Blues saw a free kick of their own come back off the post, before Paul Gartler reacted well to save the follow up (80’). After 93 minutes of action, the game concluded, and despite the competitive feeling, it ended with a scoreline fitting for a friendly; 2-2. Now it’s time for the team’s winter break, and it’s time for us to say THANK YOU! Thanks for your support in 2022, thanks for visiting our club website throughout the year, and we look forward to seeing you again in 2023!