Home Defeat at the hands of Klagenfurt

An early goal from Austria Klagenfurt separated the two sides on Saturday despite several chances for the boys in Green & White, as Rapid’s home struggles continued and Peter Pacult’s visitors kept up their strong form on the road.

After reaching the quarter-finals of the UNIQA ÖFB Cup with a big win mid-week, our team had high hopes against SK Austria Klagenfurt, and we wanted to carry that success over into the ADMIRAL Bundesliga. In terms of personnel, the coaching team had to do without Nic Kühn, Kevin Wimmer and Moritz Oswald as well as our captain Max Hofmann, who will unfortunately be out for a lengthy period of time due to hip surgery. Niklas Hedl, however, was fit again in time, so he was back between the posts on Saturday. After winning on the road in the cup, our Managing Director of Sport and Head Coach Zoran Barišić was hoping for a successful home debut (part three) in the dugout at the Allianz Stadium - but unfortunately the game would turn out quite differently.

The match started as expected with high tempo from both sides, but unfortunately it was the guests who dominated the game at the beginning. This was quickly reflected on the scoreboard, as in the 6th minute the Klagenfurters took the lead after Markus Pink was found in space at the back post, and converted with a header for 1-0 to the guests. Our team found it difficult to get into the game, and in the 15th minute Klagenfurt almost scored a second, but just under twenty minutes in came the first Rapid chance, when Martin Moormann played a cross nicely into the penalty area, however the goalkeeper was a tad faster to the ball than Ferdy Druijf (20’). We created some real danger for the first time after a Grüll free kick, which curled perfectly into the box, but Guido Burgstaller could not bring the ball under control on the turn (27’). The chances were now there in our approach play, but they lacked the decisive precision or the necessary luck in the key moments. This was the case with Ante Bajic's blocked shot attempt (28’) and when a square ball into the box whipped past the empty goal mouth (30’). Due to numerous fouls, there was no real flow generated in the game, yet shortly before the break Ferdy Druijf had a gilt-edged chance to equalise: Marco Grüll crossed the ball from the left, and although our number 38 swivelled and struck the ball on target first-time, the shot was just reachable for the Klagenfurt keeper to prevent it crossing the line (44’), and therefore we’d head in at the interval with a 1-0 deficit. 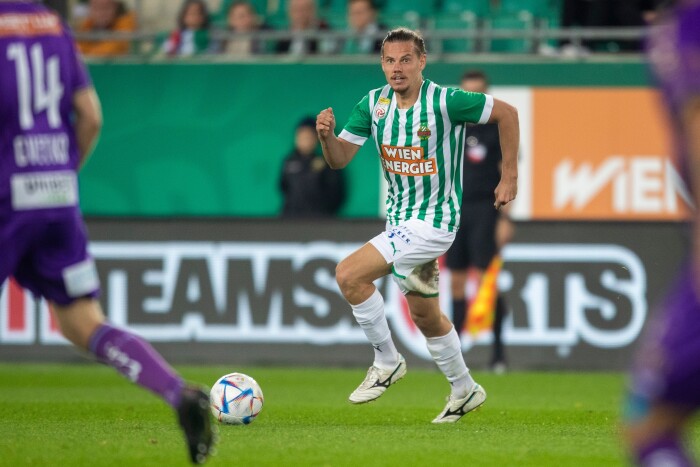 Patrick Greil was facing his former teammates in this fixture, but it didn’t go according to plan. © GEPA

The team started the second half with two changes, Martin Koscelnik and Jonas Auer were brought on for Ante Bajic and Martin Moormann (46’), and the performance of our Green & Whites was now full of pressing from the start, the push towards the opponents’ goal in the initial phase was clearly higher than it had been in the first half. As a result, Guido Burgstaller almost scored an equaliser quickly with a precise header, however, the keeper fished it out of the corner at his near post (52’). Barely ten minutes later things got dangerous again when Marco Grüll curled a direct free kick over the top (61’), however, the next two chances gave us the feeling that the ball just did not want to go in: after a Schick free kick, Ferdy Druijf laid the ball across the six-yard-box invitingly and Leo Querfeld slid in at the back post, missing the ball by mere inches from what would have been a certain goal (66’) - two minutes later, Druijf's header was off target by a narrow margin: frustrating (68’)! Guido Burgstaller also took aim and shot from an acute angle, but again the goalkeeper was well-placed to make the stop (75’). Our team was now clearly dominating the game, but the all-important equaliser just wouldn't come.

With the arrival of the Rapid quarter-hour came the next change, Berni Zimmermann took over in attack from Ferdy Druijf (75’) and Christoph Knasmüllner soon came on for Patrick Greil (82’). Thorsten Schick had a go at goal with a long range volley which was on target but straight at the keeper (85’) and Guido Burgstaller also still had one more chance for a leveller during a scramble in the Klagenfurt penalty area, but again the shot was blocked (87’). Despite a dominant second half performance and numerous chances, the equaliser simply would not fall our way today.