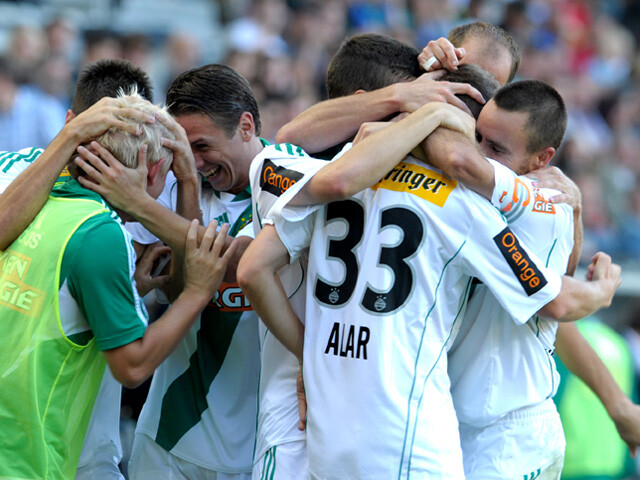 It took a vibrant Rapid side just 5 minutes to conjure the afternoons opening chance. In a sign of things to come for the hosts, Deni Alar played in Christopher Trimmel who spurned a great chance to score his third goal in three games for the Hütteldorfers. The Tyrol side were struggling to contain the flying Viennese down the flanks, with both Hofmann and Trimmel down the right and Drazan on the left running the respective full backs ragged. The final killer ball was all that was missing, letting the shaken hosts of the hook time and again. Rapid finally turned domination into a one goal lead in the 22nd minute: Steffen Hofmann converted from the penalty spot after Rene Gartler had been fouled by Inaki Bea. One - nil up and fully deserved. By contrast, an off target effort from Hackmair in the 27th minute was the best Wacker could offer by way of response in this one sided encounter. Rapid keeper Novota was enjoying a good day at the office, marshalling his back line well and snuffing out attacks before they had the chance to develop. The next clear-cut opportunity once more fell to Trimmel, who again fired over when well placed on the half hour mark. Rapid were striving for the second goal their play had merited and finally a minute before half time Gartler obliged with a wonder strike from the edge of the area. A forward ball from full back Schimpelsberger found its way to Gartler, whose precise eye of a needle shot arrowed into the top corner leaving the home keeper Safar stranded. Any half time thoughts of Innsbruck mounting a second half recovery were well and truly extinguished just three minutes after the restart. Summer signing Deni Alar finally broke his Bundesliga duck for Rapid, his effort from long range effort took a deflection and looped over the beaten Safar to all but seal the victory for Peter Schöttel's impressive side. A dark cloud for Rapid came in the shape of Rene Gartler's 70th minute injury. The influential striker headed to the treatment room and was replaced by the towering Atdhe Nuhiu. The game, however, had long ceased to be a contest and had instead turned into a keep ball session for the Green & Whites. The newly introduced Nuhiu could have added further gloss to the score line in the 85th minute but failed to convert a swift Rapid counter. The beaten Wacker side failed to trouble the Hütteldorfer backline in the remaining moments and the game ended in a very comfortable win for Rapid. Finally a richly deserved three points to take back to Vienna. Bundesliga, 9th round:Wacker Innsbruck - SK Rapid 0:3 (0:2)Tivoli-Stadion, 8.073, Referee DintarGoals: 0:1 Hofmann (23., Penalty), 0:2 Gartler (44.), 0:3 Alar (48.)Wacker Innsbruck: Safar - Harding (23. Kofler), Bea, Svejnoha, Hauser - Abraham - Schütz, Merino (57. Schreter), Hackmair, Perstaller - Burgic (78. Bammer)SK Rapid: Novota - Schimpelsberger, Soma, Patocka, Katzer - Trimmel (80. Thonhofer), Kulovits, Hofmann, Drazan - Alar (61. Prager), Gartler (71. Nuhiu)Yellow Cards: Bea bzw. Trimmel, Gartler, Katzer (gw)