For the final game of the season, finally, fans were once again allowed to enjoy Saturday’s early evening sunshine in the comfort of the Allianz Stadium! The 3,000 Rapid supporters who were in attendance watched as a new-look line-up took to the field to face LASK, as we played for second place and the visitors battled for fourth. Head Coach Didi Kühbauer started with several changes compared to the previous game in Graz, with a back three of Greiml, Hofmann and Barac in the centre and Stojkovic and Ullmann as wing backs. Petrovic and Demir began in the defensive midfield positions, offering some cover behind the front two of Kara and Fountas. The biggest surprise perhaps, was that captain Dejan Ljubicic began his final game for Rapid on the bench.

With an attacking philosophy dictating the formation, and the fans behind us, the game brought back memories of brilliant matches and special moments in Hütteldorf, and it was clear that the team would be going for the win which would bring with it a UEFA Champions League qualification place. LASK were keen to seal their own European fate too, and they started strongly, with a big moment coming early in the game. A through ball came to Balic in the box inside five minutes; he rounded keeper Richi Strebinger but then went to ground despite no visible contact, and referee Gishamer awarded a yellow card for diving, rather than the penalty Balic had been looking for.

The first Green and White effort on goal came from Lion Schuster who fired over after ten minutes, and a little later our first really big chance came courtesy of an Andrade error at the back for LASK. Demir nipped in to win the loose ball, and it took a good stop by visiting keeper Schlager to save his effort as he bore down on the LASK goal. The guests themselves were still dangerous though, and there was a clear reminder of that when Renner’s shot from the left grazed the right angle of Strebinger’s goal (24’)

The final phase of the first half saw a Peter Michorl free kick swerve powerfully past the Rapid wall, bringing a brilliant diving stop from Strebinger, who read the trajectory well and parried the ball to safety (35’). The game remained fiercely competitive, but with both sides breaking up attacks effectively, the two teams went in at the break level at 0-0. 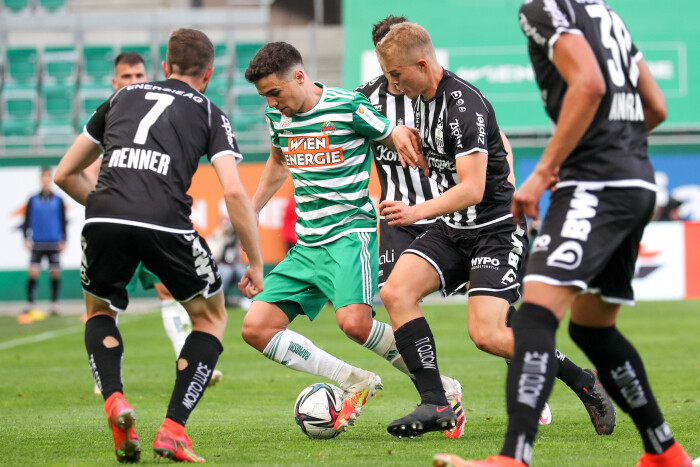 We had to fight hard for the three points, but we got the job done on the final day! 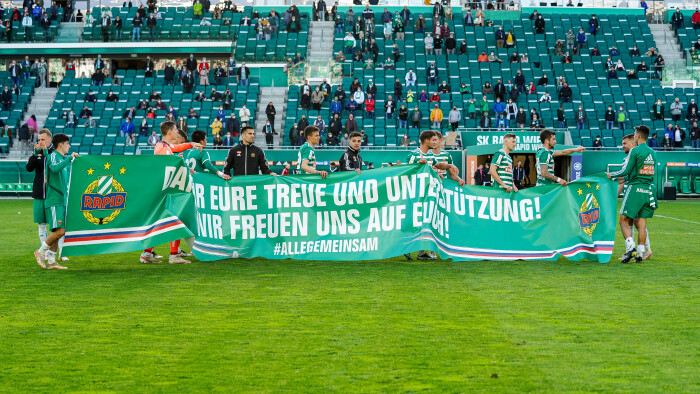 Our message of thanks to each and every Rapid fan.

If the first half had left the fans wanting more, they didn’t have to wait long for it in the second! Demir burst into the box on the left, squared in to Stojkovic, and with heavy pressure behind he was able to lay-off for Taxi Fountas to rifle the ball in and give the Green and Whites the opening goal just moments after the restart. 1-0 (47’)! Rapid noticeably grew from the momentum of that goal, and LASK’s good attacking phases from the first half started to feel like a thing of the past. Chances were still hard to come by, but the Green and Whites certainly had the upper hand as the second half progressed.

Kara found space in behind after the hour mark, but his shot was blocked and so our top scorer couldn’t add to his tally. Not long later Christoph Knasmüllner also manoeuvred his way into a promising position in the area, but Trauner recovered to slide in for the block. Next time though, Knasmüllner was not to be stopped! With a bit of room and defenders backing off, he advanced to the edge of the box and smashed a low shot into the bottom corner for 2-0, just minutes before the applause of the Rapid Viertelstunde broke out around the stadium once again.

With the long overdue sounds of cheering and chanting music to everyone’s ears, Rapid had more reasons to celebrate, as Mario Sonnleitner came on for an emotional run-out for the final minutes. The game itself fizzled out as the home side became comfortable with a two-goal cushion, and with LASK held at arm’s length, the crowd gave us the motivation to push for more. The players duly delivered, and substitute Thorsten Schick was able to weave his way down the right through the defenders and square the ball for a grateful Knasmüllner, who tapped in to make it 3-0 with what proved to be our last kick of the season!

Thanks to an enjoyable 3-0 victory, the runners-up spot in the Bundesliga was secured, and the players could celebrate having achieved their target. After the game, Dejan Ljubicic was given a fitting send off as he departs the club, and the players took to the field with a banner for the Rapid fans, which read: “Thank you for your loyalty and your support! We look forward to seeing you all together”, a message which we can’t stress enough as we begin to think about next season, full of hope on the footballing front, but more importantly full of hope for fans being allowed to attend as much as possible in the near future. RAPID! 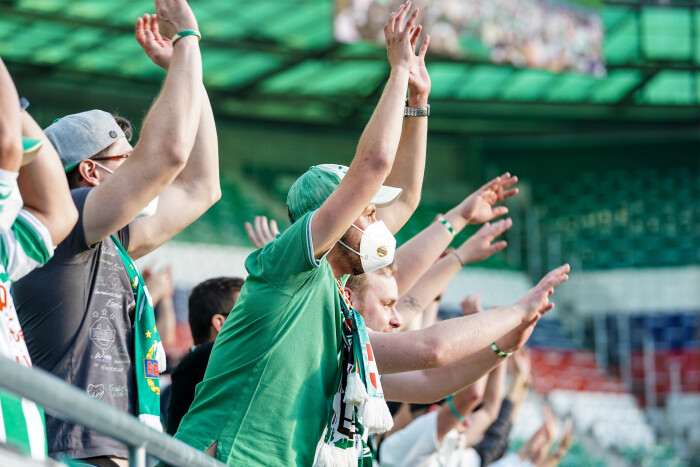 We say THANK YOU to all our fans, and we look forward to seeing as many of you as possible next season!