Burgstaller’s Goal is Enough to Hand LASK Defeat in Hütteldorf

Rapid’s dominant first half display paid off in the end in the final home game of the year, as the Green & Whites held off a second half fightback from LASK to win courtesy of Guido Burgstaller’s 10th strike of the season and move back up into the league’s top six.

LASK were the visitors to the Allianz Stadium for the 15th round of the ADMIRAL Bundesliga season on Sunday evening. The narrative before the game was not just Rapid’s aim for a win against a side who were comfortably sitting in third place in the table, but also the return of former coach Didi Kühbauer to Hütteldorf. After showing some serious resilience to snatch a point last time out in Lustenau, Rapid head coach Zoki Barišić wanted to build on that positive note and take the win to close out the last home game of the year in the right manner. On the personnel side Nic Kühn had missed a few training sessions due to illness during the week, but he was able to take up a place on the bench for Sunday’s game.

Under the floodlights, the match began with booming sound coming from the supporters, and a buzz on the pitch. LASK may have had the first shot on goal in the fifth minute, but after that Rapid established the upper hand. A sweeping shot from inside the box came off the boot of Aleksa Pejic, but was agonisingly blocked by teammate Guido Burgstaller (8’), before Thorsten Schick’s effort was too central (10’). Martin Koscelnik was next to have a go, blasting over the bar after a well-worked corner kick (21’), and the Green & White shirts kept coming forward and falling at the final hurdle. Jonas Auer’s corner kick was met by the head of Christoph Knasmüllner before being cleared away off the line by a LASK defender (24’), and then Marco Grüll had a go with a volley which stayed hit, but was tipped away by the visiting goalkeeper (27’). With Rapid well on top, Ferdy Druijf miscued an aerial effort (38’) but soon refocused to play his part in the opening goal five minutes before the interval. Schick passed from the right flank towards Druijf on the edge of the box, and after a step-over from Burgstaller, he latched onto the Dutchman’s knock-on into the area, and dinked a shot past the keeper and into the net for a fully-deserved lead. 1-0 (40’)! That goal came from the best move of the match, and moved Burgstaller into double figures for the season on his 100th appearance in the Rapid jersey. 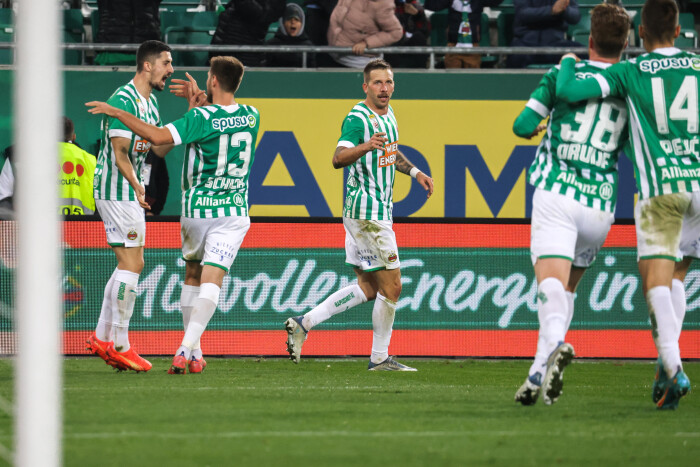 In his 100th game for Rapid, Guido Burgstaller grabbed the winning goal!

The second 45 minutes began with an impressive fan-choreo, including fireworks fired into the air from outside the stadium - pure goosebumps! Burgstaller almost gave the moment the goal that it merited when he forced the LASK keeper into a decent stop (47’) before Grüll let fly from range, but ultimately failed to trouble the goalie (49’). The tempo stayed high from the home team, and a second goal would have brought a big cushion for Rapid; Leo Querfeld set up Grüll again but he couldn’t quite get the ball on target (51’), and just four minutes later the same player could not control the ball fully, and poked a shot wide. Nic Kühn and Patrick Greil were introduced on the hour, but LASK fought back with chances for Marin Ljubicic and Robert Zulj which were off-target, as well as one decent strike from Peter Michorl which Niki Hedl did well to turn safely behind.

Roman Kerschbaum then made his way on (70’), before fellow sub Greil headed just over (74’). At the start of the Rapid quarter-hour Marco Grüll hammered a shot from the left onto the LASK crossbar, but it just wouldn’t go in! Grüll and Burgstaller then combined well up-top, but once they were bearing down on goal, the scorer from the first half could not quite get the last touch to make it 2-0 (77’). Burgstaller would eventually have the ball in the net for a second time on the day when he got on the end of a deep early cross, but despite his protestation he was caught just offside and the goal was chalked off (83’). The guests threw everything they could at our defence in search of an equaliser, but our team fought for every ball and held firm to see out the win after 93 minutes!

After a strong team performance, we took the three points, moved up into the top half of the table, and rounded off the year at home in just the right way! THANK YOU for your support in 2022 Rapid fans, let’s all enjoy the final game of the year as we travel away to Hartberg next Sunday!